On 8th October 2022, the World Head of the Ahmadiyya Muslim Community, the Fifth Khalifa (Caliph), His Holiness, Hazrat Mirza Masroor Ahmad delivered the keynote address at a special reception held to commemorate the opening of the Baitul Ikram Mosque (the House of Honour) in Allen, Texas, located in the Dallas chapter of the Ahmadiyya Muslim Community. His Holiness had officially inaugurated the Mosque a day earlier with his weekly Friday Sermon.

The reception was attended by around 140 guests, including politicians, faith leaders, and local residents.

The highlight of the event was the keynote address delivered by Hazrat Mirza Masroor Ahmad during which he spoke of Islam’s emphasis and focus on establishing peace within society, whilst also urging world leaders, public figures and all members of the public to play their respective roles in establishing peace in the world.

“The principal objectives underlying any Mosque built by our Community are always the same. Firstly, our Mosques serve as a place for our members to congregate to fulfil their religious duties of worshipping God Almighty. Secondly, our Mosques enable us to serve God’s Creation and to propagate Islam’s teachings.”

In reference to verses of the Holy Quran, His Holiness went on to highlight Islam’s emphasis on peace and mentioned that the allegation that Islam promotes extremism and violence could not be further from the truth.

“The Ka’bah was founded and built on the instructions of Allah the Almighty to convey a universal message of peace and security for people from all walks of life and nations. Whilst Mosques are built to face the Ka’bah, it is not just in terms of physical direction that they should follow the Ka’bah. Rather every Mosque and those who worship within them must strive to emulate and faithfully represent the objectives of the Sacred House.”

“Alongside worshipping Allah, the other key objective of the Ka’bah and, therefore, of every Mosque, is to be home to those people who are open-hearted, gracious, benevolent and who convey a message of peace, reconciliation and goodwill for all mankind through their words and deeds.”

His Holiness said that in chapter 3, verse 98 of the Holy Quran, Allah the Almighty states regarding the Ka’bah that ‘whoso enters it, enters peace’.”

“Fundamentally, the words ‘whoso enters it, enters peace’ demand true worshippers of Allah the Almighty to pay great attention to fulfilling the rights of other people and to afford peace and security to all humanity. In this way, they not only attain peace but also become a guarantor for the peace of others.”

His Holiness explained that Islam permitted Muslims to fight only under extreme circumstances as an act of self-defence or to protect universal religious freedom and end cruelty.

Highlighting the detail in which the Holy Quran delves in order to create peace, Hazrat Mirza Masroor Ahmad said:

“To maintain peace, the Holy Quran, in chapter 25, verse 64, instructs Muslims on how to respond to ignorant or hostile people who taunt or speak unkindly to them. Rather than reacting indignantly, Allah the Almighty instructs Muslims to keep their dignity in the face of provocation, to remain patient and to respond by saying ‘Peace be upon you’ and to take leave of the situation. The Quran teaches that rather than confront aggression and provocation in a like fashion, Muslims should set aside their pride, and respond by conveying a message of peace and avoid all forms of conflict and quarrel.”

His Holiness also referenced the first chapter of the Holy Quran which begins by mentioning that Allah is the ‘Provider and Sustainer’ of people of all faiths and backgrounds.

“When the One God Who Muslims worship is the Lord of all Mankind – Christians, Jews, Hindus, Sikhs or the people of other religions and the people who have no faith – then how could it be that a Muslim would ever cause trouble or be a source of grief for others? Rather, a sincere Muslim would always desire to bestow comfort, to be a source of peace and to establish love and harmony with all other people, rather than be a person who causes humanity grief or suffering. A true Muslim is one who shoulders the burdens of others and feels their pain and sorrow as though it was their own. So, it is with this spirit of sympathy for all mankind, and an understanding that Allah the Almighty’s Grace and Mercy is universal, that we build Mosques.”

His Holiness mentioned that, inspired by the teachings of the Holy Quran, the Ahmadiyya Muslim Community has established schools, hospitals and water facilities which serve people in deprived and remote parts of the world without any distinction of faith or background.

“Serving humanity is our mission and purpose because Islam has taught us that we must not only fulfil the rights of God Almighty but also the rights of His Creation.” 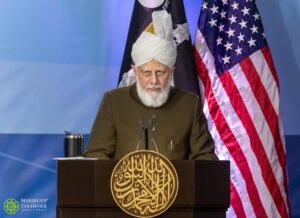 “I urge anyone who has any doubts or fears to breathe a sigh of relief in the knowledge that this new Mosque, built by the Ahmadiyya Muslim Community, will only ever represent and reflect Islam’s enlightened teachings of peace, respect and tolerance. Our teaching is not to confront those who have different beliefs to us but to embrace them. Our teaching is not to attack our opponents but to defend them and their rights. Rest assured, this Mosque will radiate nothing but love, compassion and sympathy for mankind.”

His Holiness proceeded to speak about the grave dangers facing the world.

“Unquestionably, today the world teeters on the brink of disaster, as nations around the world are engulfed by a ferocious storm of political, economic and social unrest. The war in Ukraine has been raging for months and dark clouds indicating even greater turmoil and warfare are hovering ominously above us. Opposing political blocs and alliances have become progressively entrenched, as the world becomes increasingly polarised. The result is that the peace and security of the world is unravelling by the day.”

His Holiness highlighted that it has become increasingly normalised for countries to use threats of nuclear annihilation against other countries. 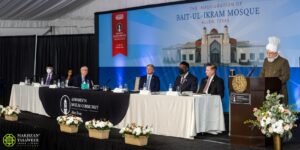 “Until recently, threatening to unleash nuclear weapons was considered unthinkable but now such threats are uttered on an almost daily basis…There is no doubt that if a global war erupts it will be unlike anything the world has ever seen. Surely, its catastrophic and devastating consequences are far beyond our comprehension. Many countries have acquired state of the art weapons that have the deadly capacity to kill thousands upon thousands of people with just one strike. It will not just be us who endure the pain and who grieve, rather our children and future generations will suffer for our sins and their lives will be destroyed through no fault of their own.”

Speaking of how future generations will perceive those who allow for nuclear war to take place, Hazrat Mirza Masroor Ahmad said:

“Undoubtedly, those innocent souls will look back at us with contempt. They will lament why their forefathers let their egos and selfish ways drive them toward destructive wars that left their future generations physically, emotionally and economically crippled. So, my ardent request and message to the world is that we must set aside our differences and work tirelessly to foster peace in society so that we may save our future generations, rather than, God forbid, sentence them to lives filled with nothing except misery and despair.”

His Holiness concluded his address by urging all people in society to make efforts towards establishing peace.

“Each of us has a role to play in the cause for peace. Wherever there is cruelty or injustice, we must condemn it. We must urge our political leaders, that instead of propelling our nations towards war and, rather than raising the temperature through threats of retribution and violence, they should endeavour to cool the tensions that exist both at an international level and within nations through diplomacy and wisdom. They must ensure that the peace and security of the world remains their paramount objective.”

Prior to the address, attendees heard from guest speakers who took to the stage. 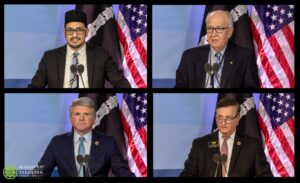 “His Holiness has been dedicated to the promotion of two closely related virtues, religious freedom and inter-religious dialogue… It is my hope that the opening of this mosque, the visit of His Holiness, will encourage us all to redouble our efforts to create, through dialogue, a peaceful, harmonious and respectful society, not only here in North Texas, but across the globe.”

U.S. Congressman Michael McCaul, the Ranking Republican Chair of the House Committee on Foreign Affairs and Co-Chair of the Ahmadiyya Muslim Congressional Caucus, introduced a special bi-partisan resolution in the U.S. House of Representatives commending His Holiness’ many contributions towards global peace and justice.

“The House of Abraham. The three major religions go back to that house. Judaism, Christianity, Islam. His Holiness, the second time I’ve had the honour to visit with him extensively, believes that we can all live under the house of Abraham. Peacefully, not at war with each other.”

Rep. Mike McCaul also recorded an official statement in the Congressional Record recognizing the historic milestone of the inauguration of Baitul Ikram Mosque and honoring the visit of His Holiness to the United States.